The synod on the family discovers a new law

The synod on the family has produced its first momentous result, the discover of the "law of graduality". In what is surely the theological equivalent of the discovery Higgs Bosun, a new era of doctrinal discovery and innovation dawns upon us.

The thing that strikes me about an appeal to graduality in Old Testament is yes, God stoops to conquer but he does so in ways which ensured that His people never lost sight of what was expected of them and the glory to which they had been called. God never lowered His expectations for His people, he simply used different means to raise them to the required standard, by carrot and stick. For their transgressions, the Israelites were required to sojourn in the desert for 40 years whilst Moses never got to see the promised land over what some lawyers might claim was a technicality and yet both chastisements were a lesson which brought His people into a more loving relationship with their creator.

God's graduality is not a watering down of his requirements for His people - it is rather an intimate knowledge of the gap between between His expectations for His people (both collectively and as individuals) and their capacity for responding to these expectations. God uses this knowledge to formulate his blueprint for our Salvation at the heart of which is His Son. Yes, God will never tire of going back to the drawing board whenever we fail to follow his blueprints (and they all begin with repentance, confession and penance) but human nature suggests that the longer we fail to follow his them, the more likely we are to give up reading them altogether.
Posted by Luke O'Sullivan at 12:02 No comments:

On Graduality and the Synod

Today is the fourth day of the extraordinary general session of the Synod of Bishops on pastoral challenges of the family in the context of evangelisation and the buzz word doing the rounds in the liberal press is "graduality". 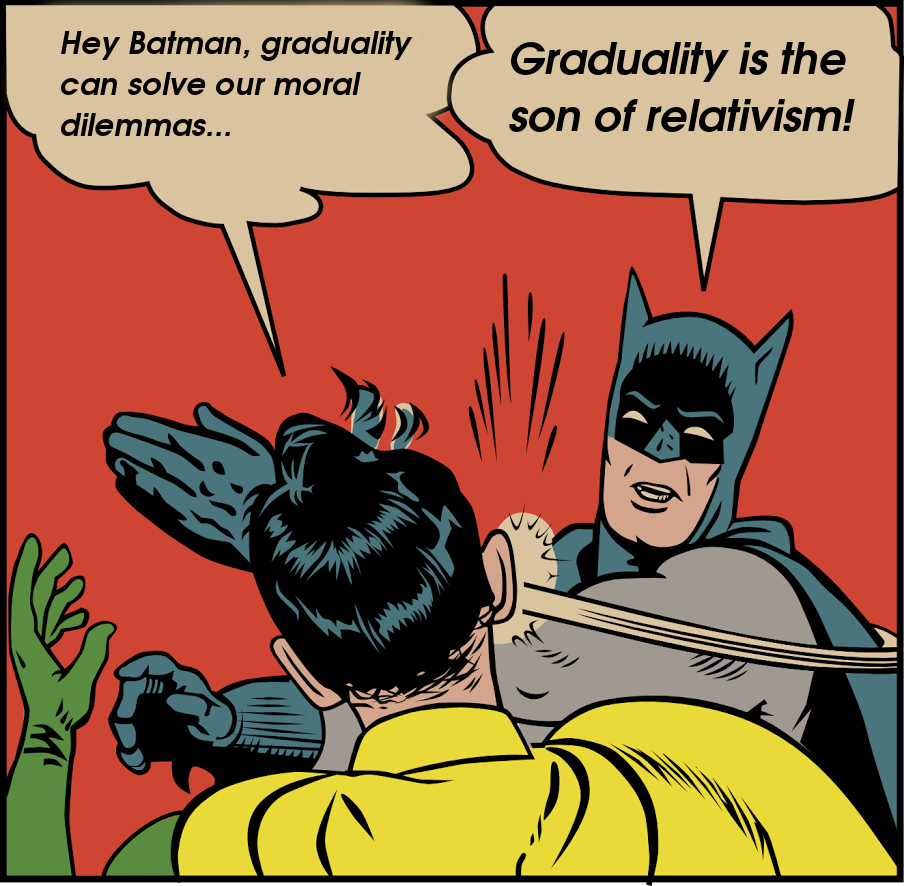 Graduality is, according to the Catholic Herald, "a way of thinking about morality that allows for human imperfection without compromising ideals" [1], recognising that individuals are unlikely to make the immediate jump from antipathy or agnosticism to acceptance of a moral truth. On the outset, this makes sense; given the acceptance, prevalence and promotion of contraception in western society, it is unlikely that an individual confronted by Catholic teaching on the subject is going to immediately put it into practice. A number of other related concepts are usually explored (e.g the effects of contraception on health) before the plunge is taken into the waters of the Tiber.

The prevalence of graduality in our moral development has been recogised by many a thinker, including Pope Benedict XVI. In his oft misquoted comments on male prostitutes, he stated that using a condom to reduce the risk of HIV infection "can be a first step in the direction of moralisation, a first assumption of responsibility". [2]

Here's the thing however: graduality may make a lot of sense in academic learning (a student can't possibly go from knowing nothing about the basic laws of physics to understanding the theory of relativity) but if it is taken as a starting point for teaching a moral truth, it will eventually undermine it because it gravitates towards relativism. No-one is hurt by only being taught complex scientific laws a step at a time, even if for the sake of simplification at a particular period, appropriate to one's age or comprehension, one is taught something which isn't entirely accurate (I remember being told that the shell particle theory we were taught at GCSE was factually incorrect by smug A-level students for example). By contrast however, one can be hurt if one is taught incomplete or false moral principles because the consequence of that is sin. Furthermore, if the behaviour becomes entrenched or habitual as we call it, the ultimate moral endpoint may be lost forever. Incomplete moral principles are also apt to be misunderstood or wantonly abused - this can be seen in the Guardian's report on Pope Benedict's comments regarding a male prostitute's use of a condom which held the headline "Pope Benedict says that condoms can be used to stop the spread of HIV"; he said nothing of the sort! Graduality also appeals to our wounded nature - why strive for moral perfection when one can appeal to a more relativistic measure of our moral progress?

So, graduality is useful to explain how a moral sense might awaken and can be used as a guide for compassion but as a starting point for teaching with authority, it is bankrupt.

[2] http://www.theguardian.com/world/2010/nov/21/pope-benedict-condoms-hiv-infection
Posted by Luke O'Sullivan at 23:25 No comments: