Bless Me Father For I Have Sinned....

Though each of the Sacraments can be said to equal in value, sharing as they do in the unity of God's plan of salvation for mankind, it is recognised that primary of place is to be given to the Eucharist which is after all the source and summit of the Church's mission. With that said, it is still possible for believers to have favourite Sacraments, often corresponding with different stages of the Spiritual Life. Since my teenage years, I have always had a particular appreciation for the Sacrament of Confession, which, over the years, has becoming an increasing source of consolation for me as I make my pilgrim way through this life.

Give a Little Whistle 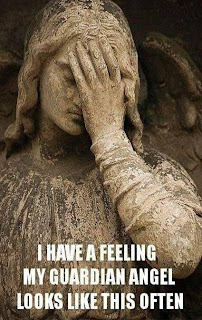 One of the great graces I appear to have had bestowed on me, whether I like it or not, is a well informed conscience (plus I suspect a rather busy guardian angel). In the western world where recognising the existence of sin has become unfashionable, the concept of guilt has become a modern pariah. Much is made of the damage that guilt does to the human psyche with special vehemence and ridicule reserved for "Catholic Guilt", that unique brand of guilt fostered by repressive Church teachings and sadistic nuns. Some catechists may over emphasise the terrors of the Fires of Hell and relish describing the horrific torments that await the unrepentant sinner to their own detriment but authentic Christian teaching on sin and guilt should fill us with hope.

For me, the ability to discern right from wrong is one of the defining characteristics of the human person and it is a life's work. "The education of the conscience is a lifelong task... prudent education teaches virtue; it prevents or cures fear, selfishness and pride, resentment arising from guilt, and feelings of complacency... The education of the conscience guarantees freedom and engenders peace of heart". [1] True freedom exists not in licentiousness and doing whatever one wants but rather being unfettered in doing what is right. The fact that we sin shows that we are not truly free because if we were, we would always choose to do good. In essence, we are "slaves to sin". [2]

Far from being an agent of repression, guilt serves an essential role - it is part of the feedback mechanism which helps us recognise that we have fallen and that we need to get back up. True, if left unchecked, guilt can destroy the human spirit but we have not been abandoned to guilt by God. Rather, through the death and resurrection of his Son and in the Sacrament of Confession, we have been given a remedy which far surpasses our fall. Indeed, the Easter Exultet goes so far as to proclaim :

"O happy fault,
O necessary sin of Adam,
which gained for us so great a Redeemer!"

whilst in "Praise to the Holiest in the height",  John Henry Newman as saw fit to write :

"O loving wisdom of our God!
When all was sin and shame,
a second Adam to the fight
and to the rescue came."

(Those lines always gives me goosebumps)

I always remember being told that a good rule of thumb was to go to confession once a month but I now tend to go whenever I feel I need to. Sometimes, there can be several months between visits, sometimes only a few days. I have made a habit of going to confession before making a long journey - it's the best form of travel insurance on the market and can't be found on any comparison websites, even those operated by Meerkats.

The tricky thing about conscience is that the better informed it is, the more responsible the individual becomes for the consequences of their actions. The greater one grows in knowledge and understanding and the deeper one's love of God becomes, the graver the effects of one's sins, both in guilt and consequence. Ignorance is certainly not bliss in this regard but planks and splinters often come to my mind when I am tempted to pour invective onto behaviour which displeases me amongst the public at large.

Of all the Sacraments of the Church, Confession appears to be the most underused. This may be a reflection of the general shying away from recognising the existence of sin in society in general but I suspect it also has much to do with the unavailability of priests, a paucity of good catechesis and a fear of what the priest may think of the penitent (itself a result of poor catechesis). We need a new generation of great confessors like St Jean Vianny and St Padre Pio to rectify this grave shortcoming in the spiritual life of so many. Confession, like Mass, should be available daily in every deanery in the morning and evening, in every diocese in the world. If you want to know more about Confession, try and get hold of a copy of Confession: The Forgotten Sacrament, or check out some of the material available from CTS.

Yo! Adrian, We Did It

The church teaches us that the Sacrament of Confession obtains forgiveness from God and achieves reconciliation with with the Church and society. Its benefits are not limited to the spiritual domain, extending as it does to individual psychological and emotional wellbeing and personal relationships. I was once told by an Psychologist who was consulting on a court case that though he had no spiritual convictions whatsoever, he thought confession was a practice which the whole of society could benefit from, if only for it's cathartic value. It really is a wonderful feeling as you emerge from the confessional having removed the monkey (or meerkat) from your shoulder.

One of the greatest spiritual difficulties I have to admit to facing is dealing with habitual sins - those sins so long entrenched that they have become fixed behaviours. With Saint Paul I have to admit, sometimes in anguish, that the things I do not wish to do I always end up doing. [3] Much is made of the fact that God will never tire of forgiving us and for this we must be extremely grateful. The problem for many however is not that God will tire of forgiving our sins but that we will tire of asking for forgiveness. The soul who reaches this state is in great peril indeed. It is all too easy to wallow in our sin and think about throwing in the towel but as Rocky says,  "it ain't about how hard you hit, it is about how hard you can get hit and keep moving forward, how much can you take and keep moving forward. That's how winning is done! [4]

O Lord, upon Your altar of expiation, I offer You all the sins and offenses I have committed in Your presence and in the presence of Your holy angels, from the day when I first could sin until this hour, that You may burn and consume them all in the fire of Your love, that You may wipe away their every stain, cleanse my conscience of every fault, and restore to me Your grace which I lost in sin by granting full pardon for all and receiving me mercifully with the kiss of peace. [5]