In recent months, following the announcement of an Extraordinary Consistory on the Family, Cardinal Kasper has suggested that the Church might consider permitting second marriages and the admission of individuals in a second marriage to Holy Communion [1]. The Cardinal's comments were born of a genuine crisis in the pastoral mission of the Church as the family, the bedrock of society and image of the Trinity, experiences an identity crisis provoked by the incredible pressures placed upon it by modern life. It was this recognition that prompted Pope Francis to call the consistory and to take a "pastoral census" on issues related to family life. Indeed, the crisis and the fundamental importance of the family was recognised by Cardinal Sodano as he opened the the consistory:

"The family nowadays is regarded with disdain and maltreated, and what we ask for is recognition of how beautiful, true and good it is to form a family, to be a family today; how indispensable this is for the life of the world, for the future of humanity." [2]


Holding back the tide

It appears that many within the Church want to submit to the onslaught against the family, recognising its denudation as a fait accompli, establishing in the process a new moral and pastoral basis from which to proceed.

Take for example, Bishop Terence Drainey of Middlesborough who has suggested that the consistory should consider a "radical re-examination of human sexuality that could lead to a development in church teaching in areas such as contraception, homosexuality, divorce and remarriage and cohabitation". [3] Such comments appear patently contrary to Scripture, Tradition and the teaching of the Church but that need not be an insurmountable obstacle if you write for the Tablet which laments the inadequacy of God's plan for the human condition, incredulously suggesting that "the Church has based its teaching about sex, marriage and family life on biblical revelation and natural law... that approach has manifestly failed". [4]
Catholic teaching on marriage and divorce is made clear in the Catechism [5] which bases its understanding on Jesus' own words: "What God has joined together, let no man put asunder" [6] and "Whoever divorces his wife and marries another, commits adultery against her; and if she divorces her husband and marries another, she commits adultery." [7]

On the issue of Communion for remarried divorcees, the comments of Bishop Thomas McMahon of Brentwood usefully summarise the dissenting position where he suggests "provisions could be made for those Catholics [remarried divorcees] to receive the Eucharist in the same way that non-Catholic Christians are permitted to share Communion." [3]

Again, the Catechism rules out this possibility as the civilly remarried "find themselves in a situation that objectively contravenes God’s law... they cannot receive Eucharistic communion as long as this situation persists". [4] As Pope Francis has alluded to, this teaching is not meant as some form of punishment - it is based on the reality of Eucharist itself - the body and blood of Christ. St Paul warns us, "whoever eats the bread or drinks the cup of the Lord in an unworthy manner, shall be guilty of the body and the blood of the Lord". Those who must refrain from the Eucharist for whatever reason are actually paying testament to the reality of the Body and Blood of Christ, a sacrifice which may obtain for them the graces they require to overcome that which necessitates their abstention.

Cardinal Kasper's comments are not wholly without merit. He gets to the crux of the issue when he juxtaposes the Church's teaching on marriage with its understanding of hope and mercy: “The indissolubility of a sacramental marriage and the impossibility of a new marriage while the other partner is still alive is part of the binding tradition of the faith of the church and cannot be abandoned or dissolved by appealing to a superficial understanding of mercy at a discount price” at the same time, "there is no human situation absolutely without hope or solution” [3]. How are we to achieve a balance between the two?

As always, the answer lies in the person and attitude of our Lord, conveniently put forward in the Gospel of today where He meets the women at Jacob's Well. [8] Jesus begins the encounter by asking the woman for a drink, and uses it as a pretext to reveal himself as the Living Water. The exchange between Jesus and the woman is extraordinary because it reveals the depths of his mercy - he recognises that the woman is a sinner and elicits in her a desire for salvation; when it is she who should be asking him for a drink, Christ's request is an invitation to serve Him. As Jesus gradually allows the women to see who He is and to understand that He is the source of salvation, He also encourages her to confess those things which are obstacle to her, namely the fact that the man she is with is not her husband. Indeed, it is Jesus' knowledge of this that partly convinces the woman of his authenticity - where sin abounds, grace abounds all the more.

The Church has a clear duty to the pastoral needs of those who, like the woman at the well, find themselves in situations which offer a potentially significant impediment to their salvation. This cannot however be at the expense of truths which are at the very heart of the Faith and the wellspring of that salvation. Jesus did not spurn the woman - he was willing to spend time with her and to help her with her doubts and difficulties. Like Christ, we have to be patient and do whatever we can can to encourage others to respond to his invitation, recognising always that we too are sinners, subject to the same reliance on grace and mercy.

This is in tolerable
The scene is set in the synagogue at Capernaum. Jesus has just taught his disciples that He is "The Bread of Life". We pick up the narrative :
"When many of his disciples heard it, they said, ‘This teaching is difficult; who can accept it?’ But Jesus, being aware that his disciples were complaining about it, said to them, ‘Does this offend you?... The words that I have spoken to you are spirit and life. But among you there are some who do not believe.’
Because of this many of his disciples turned back and no longer went about with him. So Jesus asked the twelve, ‘Do you also wish to go away?’ Simon Peter answered him, ‘Lord, to whom can we go?' [1] And Jesus said to them "In the future, men shall be able to go to your successors, to lament my teaching and they, desiring a quiet life, will heed their cries, silencing those who offend with my teaching".
Silence of the lambs 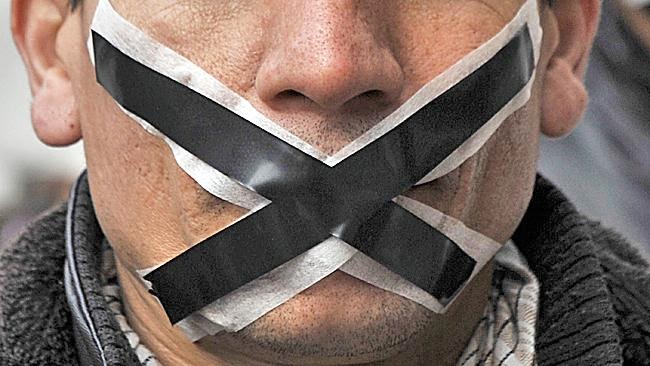 This as yet undiscovered passage sheds light of the rather troubling news that a prominent Catholic blogger, Deacon Nick Donnolly of ProtectThePope.org, has been asked to refrain from blogging and observe a period of prayer and penance by his own bishop, Bishop Campbell of Lancaster. [2]
I am all for bishops constructively disciplining errant members of their flock but Deacon Connolly's analysis of events, if sometimes rather brash and perhaps lacking in the compassion which would be required for authentic dialogue, is right out of the pages of Catechism. Under Holy Obedience, Deacon Donnolly has rightly submitted to the request of his Bishop and I hope that in time, he will be allowed to continue his posts.
As I understand it, ProtectThePope.org was set up prior to the visit of Pope Benedict to the UK as a bulwark to the nonsense which was being reported in the media regarding the Pontiff. After the visit, it expanded it's brief somewhat to cover issues of dissent across the whole church, becoming in the process a sentinel for many who self identify as traditionalists.
A read through ProtectThePope.org can be a rather depressing foray into Catholic blogging. The nature of its remit doesn't leave much room for posts which will enrich one's spiritual life (unless one is inclined to wax lyrical about the ordinariate or Extraordinary Form Mass in the comments section) and it does have the unfortunate tendency to foster a self-satisfied orthodoxy amongst its readership. For all these shortcomings however, I unfortunately recognise that given the current climate of dissent from church teaching, the blog does fulfil a purpose (I say unfortunately because divisions within the Church are a terrible blight on its mission to evangelise). The battle for future of the Church is increasingly being played out in the media and those faithful to the authentic teaching of Christ need voices that understand the terms of engagement.
The Usual Suspects
As Deacon Donnolly spends his time in prayer and reflection on his enforced gardening leave, his treatment is all the more galling as it is difficult to imagine a dissenting blogger being dealt with in a similar fashion. I recognise that the care of souls sometimes requires that the reeds blow in the wind but we have to stop short of breaking those reeds if the totality of the Faith is to be preserved and observed. Groups like ACTA (which include clergy) who are openly pursuing causes of dissent, thus undermining the teaching authority of the Church, appear to be given free reign in many diocese.
The Church will gain nothing by making accommodations on issues of dissent with the world. The world cannot reciprocate as it nothing to offer which could possibly ameliorate the loss of the Church's very identity. The more the Church acquiesces, the less relevant it will become, indistinguishable from a thousand other well meaning but ultimately impotent institutions - a vision of the Church which Pope Francis' has rejected as inconsequential NGO.
[1] John 6: 60
[2] http://protectthepope.com/?p=10156

Posted by Luke O'Sullivan at 23:48 No comments: