The Force Awakens (Me)

Last week, we were witness to a truly remarkable event - the release of a new Star Wars: The Force Awakens trailer. I had begun the week rather feeling rather lethargic and downcast but upon my first viewing my Midi-chlorians had be performing somersaults.

The first teaser trailer had whetted my appetite - it offered me the new hope of a return to the values of the original trilogy, revealed beautifully crafted shots of Tatooine, the Millennium Falcon, X-Wings and Tie-Fighers and gave us a tantalising glimpse of the new protagonists. The major talking point for most was the Sith with cruciform lightsabre but for me, the most striking aspect of the original teaser trailer was the production values - it felt and looked like a digitally superior vintage Star Wars.

The first teaser trailer arrived at the end of last year and I was beginning to get impatient for a further Star Wars fix and when it finally arrived, I wasn't disappointed. I'm a massive Star Wars fan at the best of times but I the second trailer sent me into overdrive. My reaction was remarkably similar to that of Fr Roderick Vonhögen (though less cows were involved) and I think I actually sat for a few minutes of contented silence after watching it.

Here are a few things I spotted in the trailer which may pique your interest:

1) Most of the Imperial Fleet was destroyed at Endor. How did this Imperial Star Destroyer end up on Tatooine? Has it been sitting there for 30 years since a post Endor Battle (Tatooine is a long way from the core and the Imperial Remnant) or does its crash form part of the narrative of  the film?

Edit: A friend has informed me that the planet depicted in this scene is not Tatooine. It is a new planet called Jakku and is the home of Rey. The Star Destroyer has clearly been at rest on the plannet for quite some time so I doubt it's demise will have taken place in the present of the film.

"My father has it" is evocative of the present. Is Luke referring to Anakin Skywalker's ghost presence or had Vader been resurrected, perhaps by cloning?

"The Force is strong in my family" suggests that Luke is not talking to a son, niece or nephew as he would probably have said "our family".

3) This scene looks like Luke is at a funeral pyre. Is it a flashback to Vader's or has another major character passed into the Force? The scene focuses on R2D2 - has C3PO gone to meet his maker?

4) Vader's mask was burned along with his body on Endor - someone has gone to some trouble to retrieve it. An apprentice? An heir to his legacy? 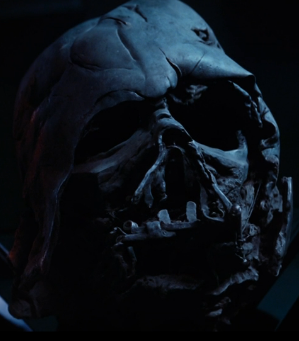 5) Are those moisture vaperator in the background? Is Kylo Ren om Tatooine?

6) That's snow in the background. Is this Hoth? Maybe it's a flashback to Alderaan and the return of the Sith Empire? Is that the Emperor in the centre?

7) The soundtrack reveals further evolution of the icon Star Wars theme which is equal parts sombre, heroic and exciting.

So, I guess you could say the trailer has me hooked and very excited! I like the fact that it entices us into the new with glimpses of the old but doesn't give any plot details away (despite my attempts to squeeze them out).  I agree with Han, "Chewie, we're home!"