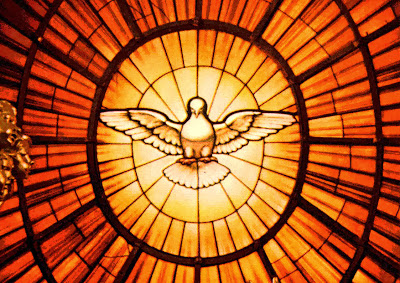 After reading a recent Twitter exchange which began by discussing indulgences, the issue of the difference between temporal and external punishment was raised. When we sin, we incur two liabilities - that of guilt and that of punishment. "When someone repents, God removes his guilt (Is. 1:18) and any eternal punishment (Rom. 5:9), but temporal penalties may remain". [1] Christ paid the price for our sins before God but did not relieve us of the obligation to atone for them.

According to Catholic teaching, those who die who are not entirely free from venial faults, or have not fully accounted for their transgressions must undergo temporal purification in Purgatory because no soul would be able to stand in the glorious presence of God with any taint of sin. This contrasts with the Eternal punishment of Hell, permanent separation from God, for those unrepentant of sin. [2] When we first receive God's forgiveness, especially at our Baptism, we are forgiven. When we subsequently sin and receive forgiveness, we are likewise forgiven. This forgiveness however does not free us from the penalty of physical death, a temporal penalty as Christ has promised us resurrection.

That temporal punishment is a result of the fall is evidenced in scripture and the whole economy of Salvation. Wisdom 10:2, where man is condemned "to eat his bread in the sweat of his brow" despite being led out of his original disobedience and Numbers 20:12, where God forgives the incredulity of Moses and Aaron, but still keeps them from the promised land is often given in support of this teaching. In addition, throughout Salvation History, those who receive forgiveness bear fruit in their repentance in further acts of penitence - alms giving, prayer, fasting and good works. As the nature of indulgences (and their abuse) and the role of temporal punishment were major contributors to the theology of the reformation, the Council of Trent addressed the issue in depth, proclaiming that satisfaction for sins, is made to God through "the merits of Christ by the punishments inflicted by Him and patiently borne", the imposition of the church, and "voluntarily undertaken works of fasting, prayer, almsgiving" [and] other works of piety". [3]

I often think of these things with the analogy of a broken window. If I break a window with a football (sin), I incur the penalties of guilt before the owner of the window (God) and punishment (I must pay to have the window repaired). Even if the window is repaired, the memory of it being shattered still remains. Every time the owner, I or the neighbours look at the repaired the window, they may remember the shards of glass flying in all directions. I therefore give a bunch of flowers to the owner of the window (Christ's sacrifice on the cross) so that now, when the window is considered, it is the flowers that are remembered, rather than the shards of glass. All analogies break down at some point and this one may fail on some important theological
point (please point it out if it does!) but it may be useful in trying to explain what can be a difficult concept for non-Catholics to understand.