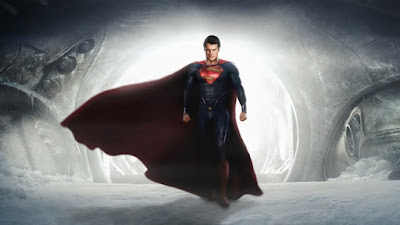 Today, after a good feed at the Westbourne (Steak Fajitas* in a Tortilla basket and a pint of Gower Gold Ale) and a mandatory Joe's Ice-Cream (Strawberry Marshmallow Sundae), I had the pleasure of watching Man of Steel, the latest re-incarnation on the Superman franchise. It was film which I thoroughly enjoyed.

I am not a comic aficionado and what little I know about Superman or any super hero is largely garnered from film or the odd visit to Wikipedia. I appreciate that to many, what I have to say about the film is largely irrelevant because I don't have the depth of character knowledge required to make a judgement so I offer my opinions as a casual observer.

Without apology, My reaction to Man of Steel is largely predetermined by my childhood memories of the original Superman films with Christopher Reeve. I'm sure it's true for every generation but there are certain films which I remember watching in my youth with have stayed with me. When I watch films like Star Wars, Back to the Future, E.T. and The Goonies, it's like reliving the past, as they evoke memories of good times, family and friends.

Man of Steel is a good film which is easy to watch and it runs along at a pace appropriate to the super hero genre. The running times feels just about right and a clever use of flashbacks at appropriate times creates a smooth and flowing narrative. Thanks to CGI, there is a far greater dichotomy between the scenes on Krypton than those on Earth compared to the previous films but I found the iconography and landscape of the former to be quite appealing. The plot is fairly simple and will be familiar to anyone who has watched the original films but it works as a tool for Clark Kent as he discovers his place in the universe as Kal-El. With that said, I do feel that as franchise starter, the plot is fundamentally flawed (A little about that later).

The casting, on the whole, seems to have been a success with particular success in the titular role as played by Henry Cavill, that of Jor-El (Russell Crowe) and their antagonist General Zod (Michael Shannon). The acting likewise is of a good standard with few superfluous characters but I feel the dialogue could have been more polished, particular in the interactions between Amy Adam's Lois Lane and Superman. I got the impression that Cavill took his role extremely seriously and was trying to squeeze everything out of the role he was given. I gained most satisfaction from the scenes between Kal-El, Jor-El and General Zog as they argue over Krypton's past, present and legacy.

The film is truly epic in scale and the action scenes are gloriously played out with the full grunt of CGI behind most scenes. For that reason, some of the fight scenes appear Playstation-esque - this is most evident in the personal combat scenes. With that flaw aside, the scale of Superman's powers is more evident because of what can be achieved with modern filmography.

The soundtrack Is suitably epic but it unsurprisingly can't live up to the original John William's score. Though the themes are not particularly memorable, I will be giving the soundtrack a second hearing on Spotify.

Man of Steel is one of those films which, though you come away from the cinema satisfied, you are instantly aware of its flaws. This often leads to a harsher than necessary final analysis, but I think I have managed to set that aside for this film.

As I watched the film, two problems instantly came to mind. The first was the wanton destruction that Superman engaged in as he battled his nemesis (Christopher Reeve never indulged in a spot of collateral damage) and the second was very little time was devoted to why Clark Kent felt so attached to the Earth and it's inhabitants. Aside, from his parents, pretty much every other human being treats the six foot plus good looking hulk with contempt. When we finally get to see Clark Kent in glasses at The Daily Planet, he's squeezed into an ill-fitting shirt and jacket - there's no way he could be the nerdish nobody that everyone likes but largely ignores played to perfection by Christopher Reeve.

As the film ended, I found that though I had thoroughly enjoyed the epic nature of the film, I missed the playfulness of the original films. This leads me to the fundamental flaw in the film as a franchise starter - it's too epic! For me, the charm of the original films is that Superman is operating in the world in which we live. Even when his fellow Kryptonians arrive and duke it out, the world in which Christopher Reeve lives is not fundamentally altered. By the time the credits role, the Earth upon which Cavill's Superman resides is fundamentally altered, on Independence Day proportions. How can Lex Luther possibly live up to that?

Had the film been less epic, we would have had more time for Clark to develop a camaraderie with his fellow human beings thus creating a greater bond between Superman and the world he has placed under his protection. Though I didn't appreciate it at the time (typical bloke reaction, I know), there is very little chemistry between Superman and Lois Lane. For my money, Lois finds out Clark Kent's true identity far too early and this spoils the opportunity to have fun with the meme as the original films did to aplomb.

Thankfully, aside from the odd canine in peril (he survives), there aren't any truly ugly scenes in the film. I do question Kal-El's judgement on kissing a girl with which he has little chemistry on what is effectively their first date however. The violence in the film does mean it's not suitable for younger Superman fans which will greatly disappoint my three year old nephew.

The Lens of Faith

Action films aren't known for their fine theological nuances but Man of Steel has one scene dedicated to the exploration of faith whilst the structure of Krypton society offers ample material for debate. As Kal-El is debating whether or not to turn himself over to the authorities and from there into the hands of his enemies, he seeks the advice of a priest. The priest, tending to an empty church seemingly devoid of faith, counsels a conflicted Kal-El, who sits in front of a stained glass window of Christ in the garden of Gethsemene. As Kal-El leaves, the priest advises him that sometimes a leap of faith is necessary before trust is established. As Christ, the only Son of God was delivered into the hands of death so save us all from sin and death, so Kal-El, the only son of Jor-El, is delivered into the hands of General Zod to save the Earth.

The primary issue that a cursory analysis of Kryptonian society unveils is that of freewill. At a crucial stage of its development, Krypton introduces artificial population control - as a result, all Kryptonian children are artificially conceived according to a grand "codex" which produces the right balance of scientists, warriors, governors etc to optimise Kryptonian society.  As such, they are predetermined creatures, so that when the last vestiges of Krypton are seemingly lost, General Zod, whose sole purpose as a warrior was to protect Krypton, accuses Kal-El of taking his soul. This naturally raises the question - to what degree is Zod culpable for his actions? Is he a victim of his own society? By contrast, Kal-El, as the first child born naturally on Krypton for tens of thousands of years, is in full possession of freewill. He can choose whether to be a force for good or for evil and his decision to choose good is therefore of greater merit.

Man of Steel is a well worth a cinema visit. It is suitably epic and entertaining but lacks the true depth of character and humour which made the originals a childhood favourite. Cavill is an able Superman but judgement has to be reserved on his Clark Kent credentials.